Stanley Robinson passed away suddenly at the age of 32.

According to the UConn Twitter feed, his nickname was Sticks:

Sirius, the brightest star in the sky, is known as the Dog Star because of its positioning within the constellation Canis Majoris. Notice the gematria values of 32 and 131.

News of his death broke on July 22nd, with the story being widely-circulated on July 23rd. July 23rd is the date on which Freemasonry honors the heliacal rising of Sirius, the “Dog Star”. Robinson played for UConn, whose mascot is the Huskies – a type of dog.

July 23rd is written internationally as 23/7. Robinson was found dead in Birmingham, AL, the same city he was born in.

Last week, Naya Rivera, whose name sounds like Nile River, drowned in a lake. She was 33, the same age as Fahim Saleh, who died the same day. Saleh was dismembered in an Osirian ritual – Osiris’s remains were dumped in the Nile River.

Robinson’s nickname of Sticks is interesting because in Greek mythology, Styx is a deity and river. Robinson was born in ’88.

But the mythological element is much more relevant than the band. The Styx River separates the Earth from the underworld, and the underworld is ruled by Pluto in Greek mythology.

Robinson was born on July 14th, making him a Cancer. He also died during the time of Cancer, which is ruled by the Moon.

On the date he died, he was virtually exactly 396 lunar phases old:

His date of death was first reported as July 20th, which was not only a Monday, but it was the 51st anniversary of the Moon landing. This is also the Reverse value of Husky.

Both the 20th and 21st fell 21 weeks before the next total solar eclipse: 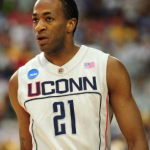 Whether he actually died on the 20th or 21st, both days can be the 202nd day on the Gregorian calendar:

His death was first announced on the 22nd. 202 is the Ordinal value of both Stanley Robinson and total solar eclipse.

The anniversary of the Moon landing fell on a date with 67 numerology:

The Dog Star has gematria of 67.

He played Basketball for UConn.

The 67 is also found in both blood sacrifice and human sacrifice, as well as the 86, which is slang for “offing” or “getting rid of”.

The date Stanley officially died was July 21st, a date with Primary numerology of 68:

After playing basketball at UConn, Robinson was drafted by the Orlando Magic.

68 is the Reduction value of total lunar eclipse, which has matching Ordinal gematria with Stanley Robinson.

News of his death made headlines on the 23rd. He died on the 203rd day of a leap year:

Robinson died a span of 310 days before the next total lunar eclipse. The anniversary of the Moon Landing was 310 / 311 days before that eclipse:

Although he was drafted by an NBA team, he never actually played in the league. I found it interesting that he ended up playing professionally in South America.