The NASCAR race featured in the article was held on June 21st, which was the 38th birthday of Jussie Smollett.

Smollett is infamous for hoaxing a racial attack in Chicago back in early 2019, an event which he still faces charges for.

It’s easy to see how these two stories are related. While the story here is not that Bubba carried out some sort of hoax, the NASCAR field still took part in a race ritual for no good reason.

During the race itself, Bubba Wallace actually broke out into the lead for one lap. His dreams of obtaining his first NASCAR win fell short, however, when he ran out of gas before the end of the race. Fortunately, a good Samaritan named Corey LaJoie was there to give Bubba the nudge he needed to get into pit lane:

Both Bubba Wallace and Corey LaJoie are Libras. This makes sense – Libras are concerned with equality and justice. With a white guy pushing a black guy to his pit stop, they are demonstrating uniting qualities.

LaJoie celebrated his racially-sensitive act of good will by posting a Tweet, saying he learned the trick from “Lightning”: 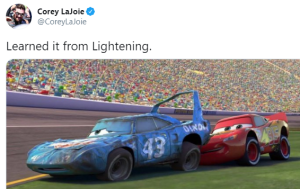 Notice how Bubba Wallace’s car is #43, just like the one from the movie. Libra is ruled by Venus. Bubba Wallace is currently 43 Venusian years old.

43 is the 14th Prime number. Libra’s detriment is Mars, and Wallace is 14 Martian years old. Wallace would end up finishing 14th place in the race.

Corey LaJoie was 14 when Cars came out on a date with Primary numerology of 41:

June 21st had Primary numerology of 67:

Corey LaJoie is an adrenaline junkie, so he doesn’t care much about spelling. The car he’s referring to is named Lightning from the Pixar movie Cars.

Even before seeing the news that the FBI had determined the noose was there for a long time, and before I realized it happened on Smollett’s birthday, I instantly noticed a striking similarity between he and Bubba Wallace: 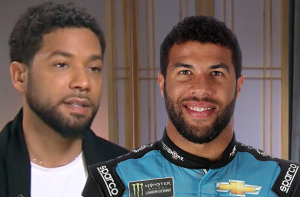