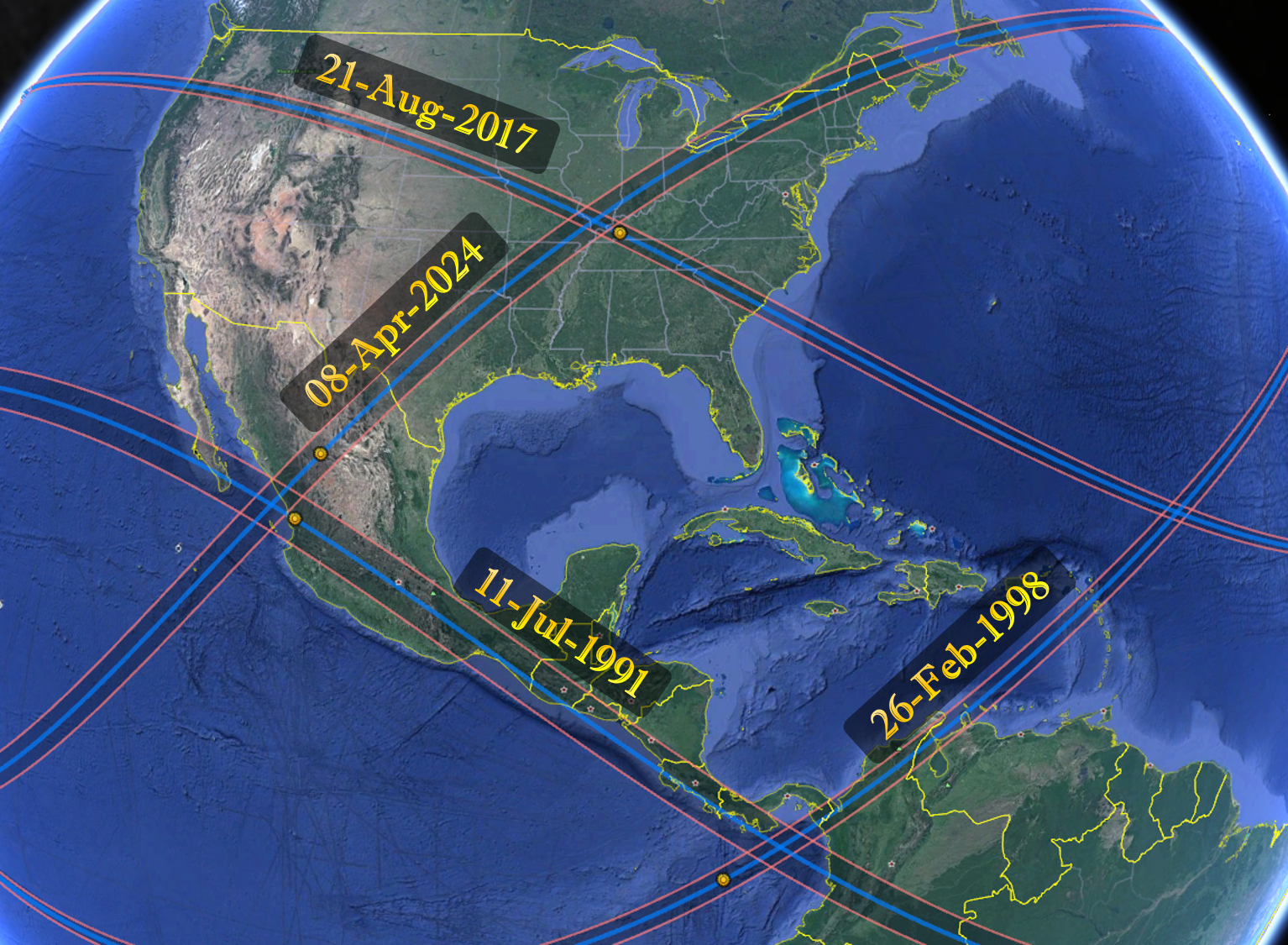 Behold this beautiful image of four total solar eclipses, spanning from 1991 to 2024

The two eclipses in the upper half of the image are the two Great American Eclipses, the first of which occurred in 2017, the second of which will cross the United States in 2024. I have tirelessly (and somewhat annoyingly) documented these events and their significance in relation to ongoing events for quite some time.

Huge 1331 Discovery!
Eclipse code in the calendar
Donald Trump and the 1331 Eclipse
Coronavirus an eclipse ritual

The two eclipses on the bottom half of the image are from 1991 and 1998. Both sets of eclipses are separated by exactly 2422 days, or 82 lunar phases (synodic months).

Perhaps even more fascinating is the fact that the point of greatest eclipse for the 1st and 4th eclipses are nearly right on top of each other: 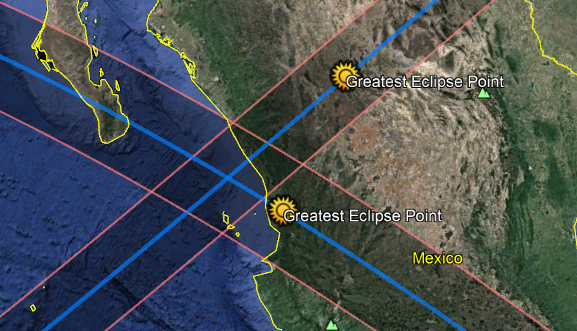 These two eclipses, 11-Jul-1991 and 08-Apr-2024, the “bookends” of this series of four eclipses, are 405 lunar phases apart from one another. Think about this in relation to President #45 Donald Trump sitting in office during the first, and perhaps even the second, Great American Eclipse. June of 2020 is 45 months before the 2024 eclipse.

45 is also the gematria and birth numerology of MLK, whose own assassination was very-much related to this cycle as you will see below.

This also makes much more sense of the fact that the number thirteen, which is extremely-connected to the Moon, sums to 45 in both Reduction methods.

13 even has matching Reverse gematria with 45, which sums to itself in Reduction:

Notice how eclipse cycle also sums to 963, a number I recently-identified as significant in not one, but two recent posts.

Only 1 in ~1,000 words in the English dictionary have the same gematria in English Extended as they do in Jewish. It’s slightly more common for longer phrases, but this is still a very significant alignment:

But of course, there’s much more of interest to explore. Instead of measuring lunar phases, why don’t we check the date calculator and see how long this eclipse cycle lasts?

These numbers are very familiar to what I’ve been decoding lately. The George Floyd killing occurred in Minnesota, the 32nd state, which was established by the eclipse crucifixion code. Floyd was pulled from a vehicle with the number 320 on it and was choked out behind police cruiser #320 exactly 32 weeks, 0 days after his birthday.

The 32nd Prime number is 131, and Minnesota was admitted to the union on the 131st day of the year.

As far as the 8 months, 28 days, this stood out because Martin Luther King gave his “I Have a Dream” speech on August 28th, or 8/28. His assassination fell exactly 32 years, 8 months, 28 days (or one super eclipse cycle) before the first day of the new millennium:

MLK died at the age of 470 months. Trump turns 74 years old this month.

Think about eclipses in relation to the 666 code. This image should help a little bit.

The number 405 stands out for another reason. I remember hating Interstate 405 during my short time in California.

I made a really interesting post connecting plane crashes in New York City to Donald Trump. The only times an aircraft ever hit a skyscraper aside from the 9/11 attacks were within a year of Trump’s birth in New York City.

Derek Chauvin wore Badge #1087. 187 is the police’s homicide code – perfect for a policeman committing a homicide.

1085 days is also exactly 155 weeks. The Emancipation Proclamation was signed 155 years ago.

The ages of the couple add up to 117, the value of “Eclipse cycle” above. Their last name was Pisano, which has matching gematria with Trump, who turns 74 here in June.

The aforementioned eclipse cycle is 32 years, or 11961 days:

They were from Cota de Caza.

There’s more interesting stuff here, like how “Cota de Caza, California” = 373, the 74th Prime number, lining up with Pisano. I’ll be learning more about this code and sharing it as time goes along.