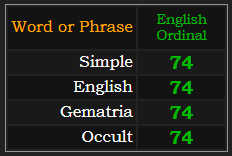 The Simpsons is a famous television series, but in conspiracy circles, it’s also known for a different reason – the uncanny number of times major world events seem to have been foreshadowed in an episode that aired a long time ago. Of course, there are a LOT of Simpsons episodes, and its humor is frequently based in cultural or mainstream issues, so one could expect some coincidences.

I won’t provide an encyclopedia of examples, but the one that still stands out the most to me is one I don’t hear people talk about very often. In 2016, Homer and Marge awkwardly talked about Arnold Palmer, mentioning his name four times, in a new episode that happened to air the very same day he died.

The point is, whoever’s writing The Simpsons, whether it’s really Matt Groening, or some shadow crew behind the scenes, they certainly possess some occult knowledge, and are allowed to hint at it on national television for everyone to see over 20 times per year. Simple English Gematria is undoubtedly part of that occult knowledge.

This is the number heavily-coded into the killing of Jesus in the New Testament.

So when the wife of a character who is primarily-known for being a Bible-thumping Christian passes away on the show, you just know the Crucifixion code will be in play.

Let’s take a look at how it unfolded for Maude Flanders, who was voiced by Maggie Roswell.

The episode she died in aired on 2/13, which is also known as Lupercalia, a festival of sacrifices. It was also the 240th overall episode of The Simpsons:

The show was Season 11, episode 14. That’s interesting, because voice actress Maggie Roswell was born on November 14th, or 11/14.

The name of the episode is Alone Again, Natura-Diddly. The first letter of each word has gematria of 1, 1, and 14.

The episode begins with the Simpsons family arriving to their couch in bumper cars.

The name Maggie Roswell is particularly noteworthy. The Roswell UFO incident occurred in the year ’47. Maggie Roswell was 47 years old when her character was killed off.

The number 47 has gematria of 1616 when spelled out. In the same cipher, the name of the episode Maude died in sums to 1616.

The Roswell incident occurred at Area 51.

In Jewish gematria, the episode’s name sums to 1046, lining up with Maggie Roswell in Ordinal.

As mentioned above, the episode aired on Lupercalia, or the thirteenth of February.

With capital letters, Maude Flanders sums to 244. This is the Hebrew value for the word kill.

The name Maude also matches Kill in English. The episode aired on the 44th day of the year.
Flanders matches Murder.

Her Jewish gematria is even just one off from human sacrifice.

In Ordinal, human sacrifice sums to 130. This is doubly-significant because thirteen has matching Jewish gematria with one of the primary words for sacrifice in Hebrew.

On the date the episode aired, which was the 13th day of the month, Maggie Roswell was exactly 13 weeks, 0 days after her birthday (or a span of exactly 567 months old):

13 is the only number to sum to 99 in the alphabetic order.

The episode’s production code was BABF11. That number is not chronological throughout the season.

After making this post, I punched in the date June 20th into my date-to-date calculator. June 20th is the date I’ve been looking at recently in relation to a possible Trump assassination.

Before I could enter the second date, a couple of numbers instantly popped out at me. I looked up and realized I still had the date this Simpsons episode aired on the other side of the calculator. It blew my mind – recall how this episode was significantly-related to the ’47 Roswell UFO incident. The number “Forty-seven” = 1616. Not only was this episode 4 months, 7 days before June 20th, but it was also 1061 weeks, 6 days before June 20, 2020!