Yesterday, April 24th, I attended the “Re-Open Wisconsin” rally at the state capitol in Madison. My goal was to create more awareness about the topic of numerology / gematria, which essentially provides proof of the satanic agenda currently being carried out by world government. Our governor, Tony Evers, is a coded agent of this system, and I want to explain how he’s playing his role by the numbers.

It was refreshing to learn that at least a half dozen of the people I spoke with were already familiar with my calculator. A couple of groups even wanted their picture taken with the Gematrinator himself.

There are only two states that sum to 44 in the standard Reduction method.

In the 2018 gubernatorial elections, held on November 6th, both states elected new governors with 44 gematria, as Wisconsin and Georgia elected Tony Evers and Brian Kemp, respectively.

After the World Health Organization declared Covid-19 to be a pandemic, both governors issued stay-at-home orders, forcing non-essential business to cut operations. Prior to extending the order, Evers’ was originally supposed to expire on April 24th, the same day Brian Kemp began re-opening businesses in Georgia.

April 24th falls 44 days after March 11th, when the WHO made the “pandemic” declaration:

44 is a number my readers will recognize as being integral to the kill code.

Notice the value of 244 in Hebrew. The date April 24th is written 24/4 internationally. While it crossed my mind that something bad could have been planned for the protest, I decided to put paranoia in the back seat and trudge ahead with my signs and pamphlets.

Tony originally issued his order on March 25th, during his 444th day in office:

Evers is currently 68 years old. The date he issued the order had Primary numerology of 68:

So did the date of yesterday’s protest:

April twenty-fourth  is the date that leaves 251 days in the year, and it sums to 251 in the alphabetic order:

This is the gematria of Evers’ full name. 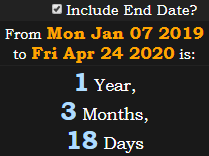 April 24th was the date Evers’ “safer-at-home” order was supposed to expire.

In that same Sumerian cipher, Evers’ full name sums to 1506.

This is the same numerology as the Ordinal value of six six six.

Tony Evers sums to 1610 in English, which is the Jewish value of six hundred threescore and six.

Evers sums to 880, like the Reverse value of Beast.

Tony Evers is our 46th governor.