Pop Smoke died on the 50th day of the year:

Curtis Jackson was in his 16300th day since birth when Pop Smoke was murdered:

Meet the Woo came out 1000 weeks, 3 days after that shooting:

Fifty was shot on a date with numerology of 13

He spent 13 days in the hospital:

13 is the only number to have Ordinal gematria of 99.

50 Cent’s debut studio album was Get Rich or Die Tryin’.

Get Rich or Die Tryin’ came out a span of 989 days after he was shot:

The album’s cover shows a shattered image of 50 Cent, with only his cross necklace occupying the only clear part. 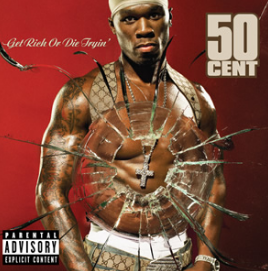 50 Cent’s first single, In da Club, was released when he was 330 months, 1 day old. Get Rich or Die Tryin’ dropped when he was exactly 331 months old:

Bashar Jackson died 33 weeks, 1 day after the most recent total solar eclipse, and 299 days before the next:

Pop Smoke’s mixtape Meet the Woo reached 173rd on the Billboard charts. His first single, Welcome to the Party, was released when he was exactly 1031 weeks old, the 173rd Prime number.

From the release of that debut single to the date of his death was a span of 303 days:

This is the Ordinal gematria of 50 Cent combined with his real name, Curtis James Jackson (III).

The eclipse crucifixion code is never complete without the number 227

Pop Smoke’s first recording was released a span of exactly 227 months after 50 Cent was shot:

This same duration is also 6909 days: