Pop Smoke’s first release, called Welcome to the Party, was made available on April 23rd, 2019. This means his career lasted a span of 303 days:

He died on a date with Primary numerology of 61

Because this is a leap year, the date he died leaves 316 days on the calendar:

When “Welcome to the Party” came out, Pop Smoke was exactly 1031 weeks old:

The song was included in Pop Smoke’s first mixtape, Meet the Woo, which reached 173 on the US Billboard charts:

Recall how XXXTentacion died 146 days after his birthday. He has matching 151 gematria with Jesus Christ.

XXXTentacion would have been 1,151 weeks old when Pop Smoke died:

Meet the Woo was released on the 158th day of the year:

He would later die at the age of exactly 247 months:

It was a span of 247 days after the anniversary of the death of XXXTentacion:

The same digits are found in the Ordinal value of Pop Smoke’s combined full and stage names.

Later that month, he died in Hollywood Hills at the age of 20 years, 7 months: 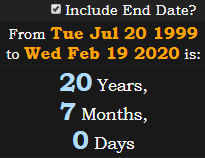 You probably know Curtis Jackson better by his stage name, 50 Cent. Bashar Jackson died on the 50th day of the year:

50 Cent, whose real name is Curtis James Jackson III, was 229 days after his birthday. Both men have the same last name and were in the news together often.

Pop Smoke would have celebrated his birthday in 2020 on the 202nd day of the year:

Combining his real and stage names yields a 79 in Reduction.

He died 232 days after the nearest total solar eclipse:

1331 is the ultimate eclipse number.