Kobe was 21 weeks, 6 days after his birthday:

666 is the Number of the Beast

The game was against the Toronto Raptors

His feat occurred on the 22nd day of the year:

It led the Lakers to their 22nd win of the season.

The number 41 is incredibly-significant to Kobe Bryant. The game in which Kobe Bryant scored 81 points was the Lakers’ 41st of the season. The rest of his team scored 41 points, just as they did in his final game, when he put up 60.

It was exactly 731 weeks before his death: 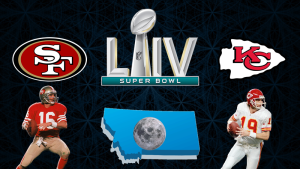 The game is being played on the 33rd day of the year:

One week, or seven days before the game, the sports world tragically lost Kobe in a helicopter crash.

Montana has thrown 122 passes in the Super Bowl with no interceptions. On the date Kobe Bryant scored 81 points, Joe Montana was 18,122 days old:

224 is found in the gematria of both Joseph Clifford Montana, his birthplace of New Eagle, Pennsylvania, and Kobe Bryant

A former player for the Raptors recently died 224 days after the date they won their first NBA championship.