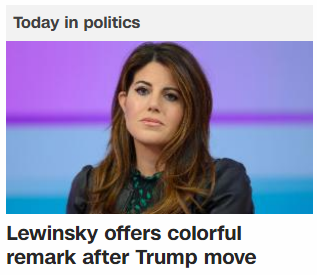 The Drudge Report first broke the news about the Clinton-Lewinsky affair on January 17th, 1998:

The scandal was ultimately detailed in the Starr Report, written by former Solicitor General Ken Starr, who spent four years investigating the incident. Today, we got this headline:

I commonly document the significance of the number 58 to Donald Trump, who won the 58th presidential election 58 years after the year ’58. Sworn in on a date with 58 numerology, 58-story Trump Tower….

Today also has Primary numerology of 58

Appropriate for a news about Trump’s Defense team.

Monica Lewinsky’s full name sums to 244 in the alphabetic order.

Notice the 109 in Single Reduction. The number 19 sums to 244 in Jewish gematria:

Ken Starr was born a span of 38 days after Donald Trump:

Today’s news has Standard numerology of 38

Lewinsky’s birthday can be written 23/7

Today’s date in the year 2020 is exactly 22 years after the Clinton scandal broke:

Today has a Life Lesson number of 22