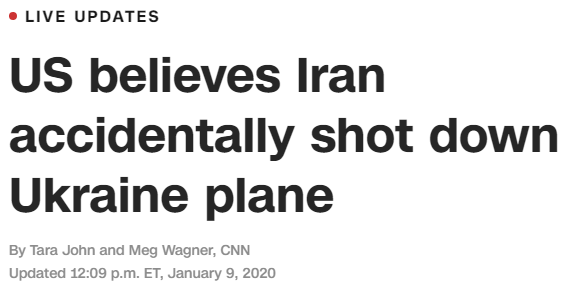 In a rather interesting development, the United States now thinks Iran may have accidentally shot down Flight 752 which crashed yesterday, killing 176 people. On the surface, this seems ridiculous, but welcome to the mainstream news cycle.

Amazingly, the GPS coordinates of the crash are even 17.6 kilometers from the center of Tehran International Airport (click to expand):

July 17th, the date of the Malaysia Airlines crash, is the same date that TWA Flight 800 came down in 1996 Many people have speculated that a missile was responsible for that explosion as well. That incident occurred on a date with a Life Lesson number of 49

Yesterday’s crash in Iran also had numerology of 49

In my post about yesterday’s crash, I talked about how there was a deep 911 riddle involving Nikki Haley, Trump’s first Ambassador to the United Nations. The 9/11 attacks, which of course involved airplanes, occurred in the year 2001. Ukrainian Flight 752 was allegedly shot down exactly 2001 days after Malaysia Flight 17 was shot down:

Yesterday’s crash in Khalaj Abad fell 6 months, 6 days after the 2019 total solar eclipse, on the date 1/08