Yesterday, I made this post about the death of sports reporter Edward Aschoff. Shortly after making the video, I learned of a plane crash in Louisiana. I made a brief post on that event earlier today.

Intriguingly, one of the victims of the plane crash is another television sports reporter. Carley Ann McCord, whose bio can be found here, was reported as one of the people killed.

The plane crash on the way to an LSU Tigers’ bowl game occurred on a date with 52 numerology:

Aschoff’s death was primarily a riddle for the 2024 total solar eclipse. On the date of that eclipse, McCord would have been 34 years old.

McCord was born a span of 1309 days after Aschoff:

McCord’s date of birth has Primary numerology of 139

She died a span of 158 days after her birthday:

The coach of the LSU Tigers is Ed Orgeron. He was seen fighting emotions before the game. 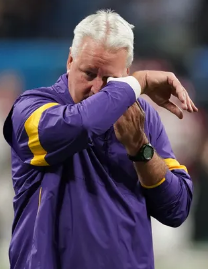 Orgeron was hired as the head coach on September 25th, 2016, meaning the playoff game was in his 1190th day since being hired:

Interesting his first name is Ed – that’s the first name of the ESPN Reporter who died, Edward Aschoff. Orgeron was 154 days after his birthday: