See my first and second posts on this story from earlier in 2019.

After a 6-month delay, NASA was able to complete its first all-female spacewalk. It occurred on a date with primary numerology of 67

If we instead measure to the next total solar eclipse, we get a span of 1 year, 58 days:

Measuring to the next total eclipse also gives us a span of 424 days:

It was a span of 204 days after the originally-scheduled date of March 29th:

Christina Koch is 40 years old, and Jessica Meir is 42. Their spacewalk was 422 months, 24 days after the first-ever female spacewalk by Svetlana Savitskaya in 1984:

She was from Russia

When she first walked in space, Christina Koch was 2004 days old. Jessica Meir was 24 days after her birthday:

Jessica Meir was born on 7/1. When she and Koch completed their spacewalk, Savitskaya was 71 years, 71 days old: 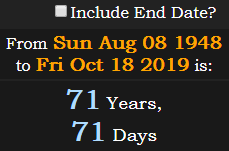 Notice how Savitskaya was born on 8/8. The all-female spacewalk was originally scheduled to occur on the 88th day of the year, which had primary numerology of 71

President Trump called the women during their spacewalk. He turned 880 months old earlier this week:

This event in 2019 occurred 2 months, 19 days after the anniversary of NASA’s establishment on July 29th:

This means it was also 9 months, 11 days before their next anniversary:

In my original post about this spacewalk, I talked about how 227 was all the rage. In my second post, I mentioned how Anne McClain was replaced by Nick Hague, who was 2270 weeks old.

McClain wound up not being involved in this spacewalk either., Instead, it was Jessica Meir, who was exactly 2207 weeks old:

The first ISS crew boarded the craft in November of 2000, which was 227 months prior:

The word Spacewalker has relevant gematria in the base ciphers – notice how it sums to 42, which is Jessica’s age. It also shares numbers with the Ordinal values of her names:

Jessica was born on the date leaving 183 days in the year:

227 is a number of ritual and symbolism, and is adored by Freemasonry.

Masonry’s symbol is a capital G, which has gematria of 13 and 33 in the capital letter ciphers.

The two astronauts’ names, when combined, sum to 1333 in Jewish gematria:

The two women, Koch & Meir, completed their spacewalk on 10/18

Number of the Beast

This is the Ordinal value of six six six

666 is the gematria of NASA

666 is the number of the Beast. The International Space Station was launched in 1998. Its abbreviation, ISS, has the same gematria as Beast

The spacewalk occurred on a date with Standard numerology of 47

Throughout human history, men have been the leaders. The media’s push to send women into traditionally male jobs is part of the larger agenda to flip everything upside-down, creating as much chaos in the human condition as possible.

So it should be no surprise that this story about the all-female spacewalk is also being used to mock men. Donald Trump, the media’s attempted portrayal of the stereotypical male, “mistakenly” said this is the first time women have been on a spacewalk, despite the fact that women have been doing spacewalks for over 35 years. This gave the media a perfect opportunity to make women seem superior by pointing out how not only was the man wrong, but the women were also polite in their correction.

No, it’s not “Man’s” error, it’s “Trump’s” error. And an intentional one, at that. The mindfuckery just never stops.