Matthew Slater has been the Special Teams Captain of the New England Patriots since 2011. This NFL season marks his 12th since being drafted in 2008.

The 34-year-old had just ran his first touchdown in from 11 yards out on the 29th day of the month:

The date had primary numerology of 77, a number connecting Christ with Matthew Wilson Slater

Matthew Slater has good numbers to be a captain of the New England Patriots. His birthday is September 9th, or 9/9

The number 777 is associated with Heaven. The first verse of the the KJV Bible has gematria of 777 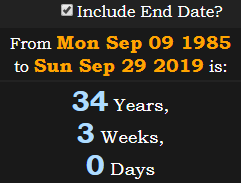 Slater was drafted 153rd. You may recall how 153 fish were caught in Jesus’ miraculous catch.