The incident occurred in Kuopio, Finland on the 274th day of 2019

October 1st is written 10/1. In this story, 10 were injured, and 1 was killed at a vocational school complex

Finland declared its Independence in 1917, which was 101 years ago:

President Niinistö was sworn into office on March 1st, the date written 1/3 in Finland. The 13th Triangular number is 91, and Niinistö has been in office for exactly 91 months:

Today is the date that leaves 91 days in the year:

Notice how Hong Kong is shown at the top of the complex:

Niinistö is exactly 3710 weeks old. This has the same digits as the word LIE flipped upside-down:

CNN and other media outlets have placed the phrase violent incident in quotes:

Today is a span of 1 year, 75 days before the next total solar eclipse: 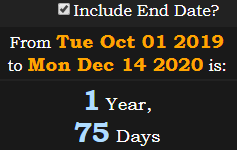 That eclipse falls on a date with primary numerology of 66