In 2018, for some reason, AXS TV began airing a show called Real Money, starring Eddie Money and his family, in 2018. The episode in which he reveals his cancer diagnosis aired the day before Eddie Money died.

He died from esophageal cancer 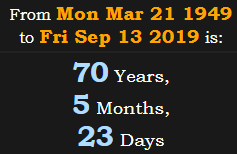 The show’s debut had date numerology of 50 and 23

Eddie died on the 13th day of the month. The date is written internationally as 13/9

I’m making this post from Anarchadelphia, which is a conference primarily focused on cryptocurrency. The goal is to end the control structure put in place through the Federal Reserve, which controls our money supply, and thus controls the economy. So how weird is it that Eddie Money died on Day 1 of the event?