She’s accused of being a Russian spy

Her conviction falls 46 days before the birthday of Russian president Vladimir Putin:

Putin will be 67 years old: 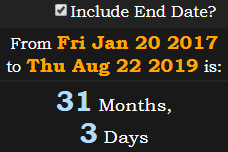 Butina was found guilty of trying to influence conservative political circles to promote Russian interests around the time of the 2016 election. That election was held on the date November 8th, or 11/8. Donald Trump, who won that election, is coded nicely with the date August 11th this year, also written 11/8. This conviction falls a span of 1018 days later:

227 is significant to the mathematics of the circle. Putin has been in office for 7 years, 227 days: