This occurred on August 16th, the date written 16/8

Larry Griffin II was discovered to be the man placing the rice cookers around NYC on the date leaving 137 days in the year:

Boston, Massachusetts, the site of the 2013 Boston Marathon bombing, sums to 253 in the alphabetic order

The Governor of New York, Andrew Cuomo, was 253 days after his birthday:

On the date of the rice cooker incident, New York mayor Bill de Blasio had been in office for 2053 days:

Bill de Blasio was 14 weeks, 2 days after his birthday:

This brings us to the next part of the riddle, which shows us how the incident is related to the 9/11 attacks in NYC. The 9/11 attacks, allegedly carried out by Al-Qaeda, lasted 102 minutes, or 1:42

As of yesterday’s rice cooker incident, Mayor de Blasio was in his 2054th day in office:

Governor Cuomo was a span of 254 days after his birthday:

In Extended gematria, August sixteenth has a matching 285 with New York, New York and its Mayor: 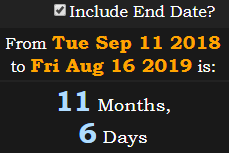 Recall how Larry A. Silverstein was the man whose bid to purchase the Twin Towers was accepted a span of 1 month, 19 days before they came down on 9/11 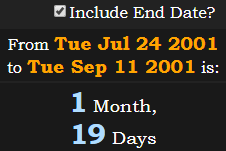 156 is the Jewish gematria of False flag 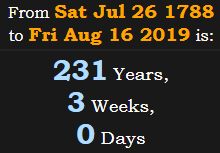 The day before the rice cooker incident was 2313 days after the Boston Marathon bombing:

Both the Mayor of NYC and the Governor of New York state were sworn into office on January 1st. August 16th falls 227 days later:

Silverstein was 32220 days old on the date of the rice cooker incident, which fell 11 months, 5 days after the anniversary of 9/11: