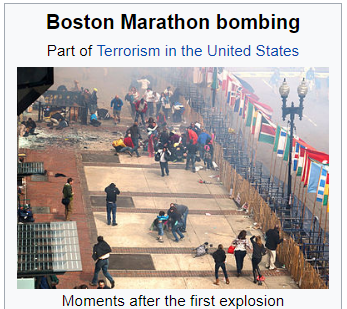 Boston Marathon bombing sums to 1092 in English, like how eclipse sums to 192 in Jewish:

A False flag is always aligned with an eclipse

This is because in the Bible, Jesus was crucified during a solar eclipse. Jesus was betrayed by Judas at age thirty-three, which led to his ritual human sacrifice

The bombing was 704 days before the next total solar eclipse, which fell on March 20th of 2015:

In Greek isopsephy, total eclipse of the sun sums to 260

The bombing in Boston, Massachusetts fell on the date leaving 260 days in the year:

In Hebrew gematria, total eclipse sums to 227, a number that’s very significant in relation to the circle.

With capital letters taken into account, Boston Marathon sums to 227

We’re told it was the Tsarnaev brothers who were responsible for the bombing, which was exactly 227 weeks before the 2017 Great American Eclipse:

Two bombs blew up at the Boston Marathon 1050 weeks after the 1993 World Trade Center bombing:

At the time, Thomas Michael Menino was the Mayor of Boston. The Boston Marathon bombing occurred just a few days after he finished his 237th month in office:

He was elected in 1993. This bombing occurred exactly 19 years, 9 months, 3 days after he took office: 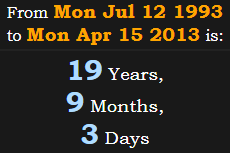 Dzhokhar Tsarnaev was born in ’93, exactly 146 days after the ’93 World Trade Center bombing:

The two bombings were 241 months apart:

The Marathon bombing was a span of 5 months, 3 days (or 153 days) after the most recent total solar eclipse 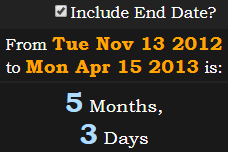 On the date of the Boston Marathon bombing, Menino had been in office for exactly 1031 weeks:

Both Dzhokhar and Tamerlan have the patronymic name Anzorovich

These bombs blew up on a date with 32 and 14 numerology:

End of Menino’s Term & His Death

Mayor Menino’s last day in office was exactly 38 weeks after the bombing:

Dzhokhar’s name has gematria of 380 in two different methods:

His name was also spelled as Jahar

Dzhokhar was 7770 days old when Menino passed away:

Boston Mayor Thomas Menino died on the 303rd day of the year:

His death was 3 months, 18 days after the anniversary of the date he took office. This was also 21 years, 110 days after that same date:

Dzhokhar Tsarnaev was sentenced to death on June 24th, 2015, the Scottish Rite of Freemasonry’s anniversary. This was 26 months, 9 days (or 2 years, 70 days) after the bombing:

He was sworn in 197 days after his birthday:

Menino spent a total of 20 years, 5 months, 3 weeks in office. His last day as Mayor was 25 weeks, 3 days after the anniversary of his first: