In my initial post about this event, I mentioned how the shooter’s first name matches both Dayton and murder

We then learned his full name was Connor Stephen Betts

In the Reverse alphabetic order, his name sums to 254, which is the Prime number gematria of murder

He had Reduced birth numerology of 34

In the standard alphabetic order, his name sums to 232

So it’s appropriate he was into Satan

This is also the Jewish value of Oregon, the District in which the shooting occurred:

The word satanic sums to 244, which matches the Hebrew value for kill

On the date of the shooting, he was exactly 24 years, 40 weeks old: 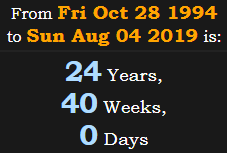 This satanic killer was from Bellbrook, OH

When abbreviated, Bellbrook, OH has Jewish gematria of 297

Connor Betts was 297 months old on the date of the shooting:

His date of birth had primary numerology of 151

He was 24 years old, which is found in the numerology of both his birth and his death:

Connor Betts has the same gematria as Dayton shooter

His birthday leaves 64 days in the year:

A unique detail about this shooting is that one of his victims was his own sister, Megan Betts. The two have matching gematria:

Murdering one’s own sister is called sororicide, and it’s even less common than you would think. Check out how sororicide matches Megan Betts in Jewish gematria:

In Jewish gematria, death sums to 118, the same as homicide

The address of the bar where the shooting took place, Ned Peppers, sums to 1108 in the same cipher: