This most certainly appears to be a riddle related to this year’s total solar eclipse and the crucifixion code. In the Gospels, darkness fell over the sky during the crucifixion of Christ. This story involves the Chrisley family.

Today has a Life Lesson number of 33, the age at which Jesus was when crucified under an eclipse

57 is the Ordinal value for Moon

The names Todd and Julie Chrisley sum to 218 and 322, familiar numbers if you’ve been paying attention to the news of Jeffrey Edward Epstein

In Jewish gematria, The Moon sums to 283

See the deeper riddle with 2830 below.
On the date of this year’s total solar eclipse, Julie Chrisley was 5 months, 23 days after her birthday. South Carolina was admitted to the Union on 5/23
A spin-off from her show named Growing Up Chrisley debuted a span of 5 years, 23 after the debut of Chrisley Knows Best

Julie Chrisley was 7 months, 4 days after her birthday on the date of the indictment on tax evasion charges

The indictment is also 1 month, 11 days after the eclipse:

Tax evasion has Reverse gematria of 59

Julie was indicted on the date she turned 17017 days old:

Her birthday is written 1/9, like 19, which is the Hebrew Reduction value of kill

She is a survivor of breast cancer

Her husband was born on the date written 4/6

The name Chrisley has perfect overlap with thirteen

Today is the 130th day since Todd Chrisley’s birthday:

Julie Chrisley was born on January 9th, written 1/9
Today is exactly 19 weeks after the premier of a spin-off named Growing up Chrisley

130 is the first number to have Ordinal gematria of 227

In Greek Isopsephy, total eclipse of the Sun sums to 260

This is the Reverse value of the same phrase, Todd & Julie Chrisley

The number 260 has a unique property – it sums to 229 in both English and Jewish gematria:

The 2017 Great American Eclipse ended in their home state of South Carolina, which was 229 years, 2 months, 29 days old at the time:

I really didn’t think this would show anything interesting, but egad! The governor of South Carolina, Henry McMaster, has been in office for a span of 133 weeks, 1 day: 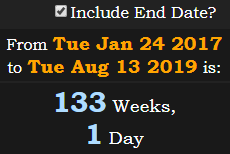 1331 is the ultimate solar eclipse number.

The Death of Jeffrey Epstein
More on the Dayton Shooter