Notice how bigger fraud than Enron is listed in quotes.

General Electric was incorporated on April 15th of 1892, making it exactly 6644 weeks old: 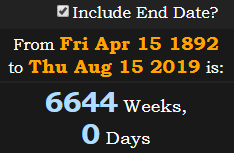 This story is going to get a disproportionately-large decode. As an unnecessary disclosure, I was hired by GE Healthcare in 2013 after 6 years of working as a contractor, so the future of my employment is of particular interest to me.

GE has been on a downward spiral since last year, when problems with the company’s financial reserves were brought to light by former CEO John Flannery. Despite these woes having been caused by CEO’s of the past, GE decided to name a new CEO following the revelations.

I always knew something was up with this guy. To begin with, Larry Culp is the first outsider GE had brought in to run the company in their 126-year history:

The name Culp reminds me of the word culpable. Naturally, investors will be looking for someone to hold culpable as the company continues to lose value. This is a difficult coincidence to ignore, especially considering Larry Culp has the same gematria as culpable. This number is also shared by the whistleblower’s last name, Markopolos

Today leaves 138 days in the year:

Bernie Madoff was born in 1938 and plead guilty a span of 318 days after his birthday.

Larry Culp also has the same gematria as Madoff

Madoff plead guilty on March 12th, 2009. Notice how the gematria of Larry Culp Jr. matches the duration since that date:

Culp and Markopolos have matching numbers in Reverse Reduction as well:

For most of the day, the news kept pointing out how today would be the largest single-day stock drop for GE since October 19th, 1987, which was 31 years, 301 days ago: 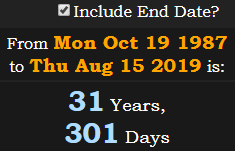 Today has primary numerology of 62

62 is the gematria of both Bernie Madoff and Bernard Madoff, who Markopolos blew the whistle on over a decade ago.

Larry Culp’s full name sums to 305, similar to the 35 gematria of General, Bernie, and Ponzi

Today is a span of 109 days after Madoff’s birthday: