Saoirse Kennedy Hill has reportedly passed away. Her middle name appears to have been Roisin

This stands out because Roisin not only begins with the Ro (33) like Robert, her famous grandfather, but the two names have the same gematria:

Kennedy Hill sums to 119 in Ordinal, and her full name sums to 205 in the same method:

Her death fell within 24 hours of the first Black Moon since July 2016.

She died a span of 2 months, 11 days after her birthday: 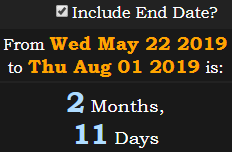 The Moon-Sun conjunction for this Black Moon ended within about an hour of paramedics being called to the compound.

Saoirse Kennedy Hill died at the Kennedy Compound 10 weeks, 1 day after her birthday:

Saoirse was 71 years younger then her grandfather, Robert Francis Kennedy, whose name sums to the same as Kennedy Compound

Her name, Saoirse, has gematric overlap with the number 19

Her last name sums to the 19th Prime number:

Recall how we recently had the story of a woman named Oswald dying at an Ironman race. Oswald allegedly killed RFK’s brother, JFK. On the same day RFK’s granddaughter died, wrestling legend Harley Race passed away.

As I consistently document, 19 is a significant number – there are 19 years in the Moon’s Metonic cycle.

There is much to be said about the relationship between the Moon and death.

Nineteen, the number of years in the Moon’s Metonic cycle, has Jewish gematria of 244. See how this directly relates to the Hebrew values for kill

Hill has Jewish gematria of 57, matching Moon in Ordinal:

The date of Hill’s death had 48 and 21 numerology:

These two numbers are found in RFK’s birth numerology:

This occurred on August 1st, the date written 8/1. It’s a little over 8 months, 1 week after RFK’s birthday. It also falls a span of 8 weeks, 1 day after the date he was murdered:

In Reduction, ritual sacrifice sums to 73, like sacrifice in Ordinal. This matches the name Saoirse Hill 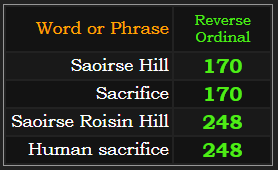 33 is a number of sacrifice

There’s too many connections to really list here. But one I can’t ignore is this:

Saoirse was born on the 142nd day of the year:

She died in Cape Cod