A popular YouTuber from England has passed away on July 12th, written 12/7 in the United Kingdom.

She passed away at the age of 35

Hartridge was known for her series called 10 Reasons Why

Her death at a roundabout in Battersea, England fell on a date with Full numerology of 58

In Reverse, ritual sacrifice sums to 251, just like freak accident

She was hit by a truck

This matches the name Emily Hartridge and ritual sacrifice in Ordinal and Reduction:

She died 82 days after the Queen’s birthday:

She was killed while on an electric scooter. This is reportedly the first time anyone has died on an e-scooter in Great Britain.

She died a span of 1 year, 5 months, 3 days before the next total solar eclipse: 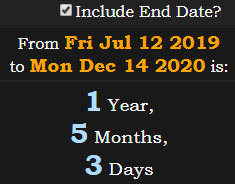 The word sacrifice sums to 347 in Hebrew. Perhaps this is why the number 13 is often considered so unlucky…

33 is a major number of sacrifice. Consider how Jesus was crucified at age 33 under an eclipse.

Emily Hartridge was exactly 1833 weeks old at the time of her death:

This seems especially relevant, because she was born on the 146th day of a leap year: