It’s pretty interesting they chose to spell his name as Morsy – this is the first time I’ve ever seen it spelled this way. I’ve been accustom to seeing it spelled as Mohamed Morsi.

67 is the 19th Prime number. Morsi died 10 months, 9 days after his 67th birthday during a court hearing 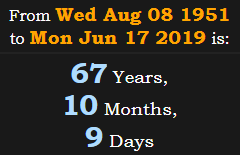 This means he was also 7 weeks, 3 days before his birthday:

His death falls on a date with Full numerology of 62

This death is highly-connected to the eclipse crucifixion code. Mohamed Morsi has a lot of gematric overlap with Jesus Christ, who died under a solar eclipse.

Morsi died while in court

In Jewish gematria, Jesus the Messiah sums to 1331

This eclipse code is centered around the number 1331. The only total solar eclipse in the year 1331, which is still the only one I’ve ever seen whose path of totality never crossed a major body of water, was on November 30th

President Mohamed Morsi was in court facing an espionage charge

He was born on August 8th

Both Mohamed Morsi and his date of birth have 61 gematria:

He died 60 months, 10 days after the current Egyptian President, Abdel Fattah el-Sisi, was sworn in: 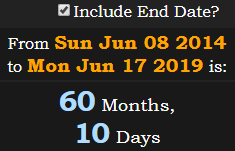 This 61 is also in the gematria Morsi shares with Jesus and the date he died:

Notice the 187 and 218 Ordinal values of June 17th. The homicide code is 187, and the crucifixion darkness painting was completed in 1870.

In Ordinal, Jesus Christ sums to 151

Morsi’s last day in office was 1510 days before the 2017 Great American eclipse:

He died in Cairo, Egypt

Mohamed Morsi died on June 17th, a span of 666 days after the most recent total solar eclipse:

The date of Morsi’s death was 15 days before the next total solar eclipse:

The date of that eclipse is July 2nd, the date written internationally as 2/7. Perhaps that’s why CNN went with the less-popular spelling of Morsy for their headline.

Without the end date, his death fell 665 days after the most recent total solar eclipse: