The Toronto Raptors and NBA Championship both sum to 257, meaning there must be a blood sacrifice for the total solar eclipse involved. In this case, it was Denver Broncos’ owner Patrick Bowlen

Bowlen died a span of 251 days before his birthday:

In Ordinal, ritual sacrifice sums to 154, which happens to be the same value as both Toronto Raptors and Denver Broncos. Also consider how the Boston Red Sox’ David Ortiz was shot earlier in the week.

86 is the Ordinal value of nineteen, which is tied to the kill code.

There are almost exactly 19 years in the Metonic cycle, which has overlapping gematria with both Denver Broncos and nineteen years

In Greek, the word for nineteen years is Enneadecaeteris

Patrick was a span of exactly 3930 weeks old when he died: 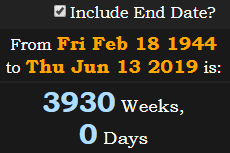 393 is one of three numbers to sum to 1331, the ultimate eclipse number, in Jewish gematria:

Less than 8 months after the Boston Red Sox won the World Series, the Toronto Raptors won their first NBA Championship.

The two teams won their championships a span of 229 days apart:

This upcoming season will be the Broncos’ 50th in the NFL, and first under new head coach Vic Fangio, who was hired after their 49th season:

Some more interesting connections between the Toronto Raptors and Pat Bowlen:

Patrick died in the 116th day of his age, on the same date as Game six of the NBA Finals

Think about how Bowlen sounds a bit like Bowling…