This year’s MVP of the NBA Finals was Kawhi Leonard.

The award was presented the same night the Raptors won the NBA Finals, a date with 58 numerology:

It was the Raptors’ 24th season in the NBA, resulting in the first championship for Canada

On the date of this year’s total solar eclipse, Leonard will be 28 years, 3 days old:

In Hebrew gematria, the word Moon sums to 218

On the same date Leonard won Finals MVP, Pat Bowlen died. He was born on February 18th, or 2/18

The most recent total lunar eclipse was on January 21st, or 1/21. The day before last night’s game, Leonard just turned 10210 days old:

If we instead measure to the next total lunar eclipse, we get 713 days:

In Ordinal, Moon sums to 57, the number of degrees the Moon ranges around the equator:

The Raptors won the title a span of exactly 57 weeks after firing their last head coach, who was born in ’57 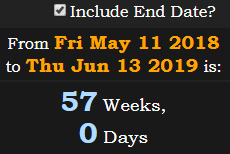 They hired Nick Nurse as the new coach almost exactly one year to the day before wrapping the series up.

It was the 13th of the month on which Toronto won the title and Bowlen died. 13 is the 6th Prime number, and it was in June, the 6th month.

The Gregorian calendar pays tribute to this special date:

In this cipher, thirteen sums to 347