Note the Ordinal value of 137, the 33rd Prime number. Including the end date, this shooting fell 33 days before this year’s total solar eclipse

Without the end date, the shooting was 32 days before the eclipse:

Both the shooter’s first and last names sum to 32

Combined, his name sums to 64

64 is also the gematria of his occupation, a city engineer, which matches the values of solar eclipse in both Ordinal & Reverse:

DeWayne has the same 77 value as engineer. Craddock has a Prime relation to “public utilities worker”:

The Governor of Virginia, Ralph Northam, had been in office for a span of exactly 72 weeks. Princess Anne is a community in Virginia Beach 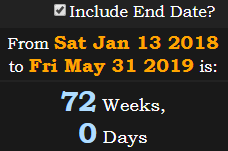 This is also exactly 503 days:

Virginia Beach Mayor Bobby Dyer had been in office for exactly 192 days:

Virginia Beach Municipal Center (and Municipal) matches the gematria of the shooter:

The shooting was on the 151st day of the year:

This shooting occurred 11 months, 6 days after the date Virginia was admitted to the Union:

Mayor Bobby Dyer had been in office for 6 months, 11 days:

The shooting occurred on a date with 75 and 19 numerology:

In Reverse, chaos sums to 89

The Earth is 11/3rds the size of the Moon. 113 is the number of deception. 1130 is the gematria of the victim’s names when combined:

163 is the Ordinal value of Municipal Center, where these people worked. Two of the victims were from Chesapeake. Earlier in the week, we had this shooting take place in Chesapeake, Virginia

38 is the Hebrew Ordinal value of Moon, which also sums to 218

Notice how the Governor’s full name sums to 218 as well. This is interesting, because less than a week before these shootings, Northam turned 21800 days old:

On the date of the Virginia Beach shooting, he was in his 21811th day since birth:

There’s more overlap with the 170 value of Moon:

It’s pretty interesting that city workers were killed, because city has nice overlap with Moon as well:

Take special note of the 57 value in Ordinal though. The 57th Prime number is 269, matching the name of the shooter: