He was a survivor of the Columbine massacre.

He died exactly 240 months, 4 weeks after the Columbine shooting. These sync up with the Hebrew gematria of kill 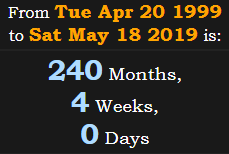 Although his death was discovered on the 18th, most people will be reading about it on the 19th.

Each of his names have align to the English value of kill:

He either died on Friday or Saturday – both can measure 46 days from the next total solar eclipse:

This story is about a survivor of a school shooting

In Ordinal, sacrifice sums to 73, matching this survivor’s name, Eubanks

This also appears in his full name’s Reduction value, just like ritual sacrifice

Measuring instead to the most recent total eclipse of the sun, we find Eubanks died 20 months, 27 days later:

Columbine High School is in a suburb of Denver, Colorado

An eclipse of the same Saros cycle occurs once every 223 synodic months.

His death is now being reported 223 days after his birthday:

Notice how CNN last updated the article captured up top at 11:16. This story is about Austin Eubanks, who was a survivor of the Columbine massacre in Littleton.