McDonald’s became a corporation in ’55

The reason police are making this bizarre decision is because earlier this month, someone threw a McDonald’s milkshake on political activist Tommy Robinson, when he was 5 months, 5 days after his birthday:

Robinson is exactly 1903 weeks old as of today:

This means he’s also exactly 193 days before his next birthday:

Notice how the incident occurred just outside of Crawshaws 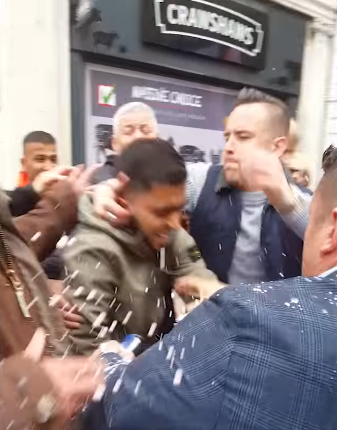 This is where the post gets interesting – not only does Crawshaw’s have overlapping gematria with Milkshakes, but the number 273 is especially significant this week.

In an important scientific event you have likely not heard of, there will be an international redefinition of measurements on May 20th. As a result, the definition of a Kelvin will be tweaked. The melting point of water, or 0° Celsius, is 273° Kelvin.

Milkshake and Kelvin both have overlapping gematria that matches today’s Life Lesson number:

The first milkshake was thrown on Tommy Robinson in Warrington, England

Without the plural S, the word milkshake sums to 183

The Kelvin scale is named after William Thomson, 1st Baron Kelvin. Think about the similarities between the names Thomson and Tommy Robinson.

Both Baron Kelvin and William Thomson sum to 66 in Reduction, just like absolute zero, which the Kelvin scale begins on.

Tommy Robinson is the man who had the McDonald’s milkshake dumped on him. Think about how funny it is that ice cream is being used in a riddle regarding freezing temperatures.

Today’s date of May 18th ties into this story as well. This date is written as 18/5 in the United Kingdom, where this news originates. Baron Kelvin will be 71,185 days old on the date the Kelvin scale gets a new definition:

The announcement of the change was made 185 days before going into effect:

Of course, this year, in which the definition of Kelvin gets changed, is 2019.

The new definition will be registered 1337 months after William Thomson’s death:

But 1377 stands out for another reason. Last season, Tight End George Kittle of the San Francisco 49ers broke a single-season receiving record for his position with 1377 yards:

He will be in his 1337th week since birth when the change occurs:

Kittle will be 223 days after his birthday on May 20th, when the new definition of a Kelvin takes effect. that date is also a span of 2 months, 23 days before 8/11, which is the 223rd day of the year.

Above, I mentioned how the melting point of water is 273° Kelvin. George Kittle broke the tight end receiving record.

Recall how many people are pointing to 8/11 for some sort of event in San Francisco. This certainly makes it intriguing. Check out the other main numbers in this verse:

As for the 567 in Reduction, that’s exactly how many weeks are between the birthdays of George Kittle and Tommy Robinson: