Former WWE Diva Ashley Massaro has passed away at age 39. It’s being reported as a suicide. This death is more evidence that people are dying by, and quite possibly being murdered by, the eclipse crucifixion code, which is derived from the story of Jesus Christ being killed under a solar eclipse in the New Testament.

Ashley Massaro was born on the 146th day of the year, which leaves 219 days on the calendar:

33 is a number closely tied to human sacrifice.

She was born in New York, New York

She passed away in Smithtown, New York

Massaro was the winner of the 2005 WWE Diva Search. This series was cancelled in 2007, with one brief revival in 2013. However, it was recently announced on January 25th that the series would be returning this year.

Intriguingly, that announcement was made exactly 3 months, 3 weeks (or 15 weeks, 6 days) before Massaro’s death:

Ashley Massaro and thirty-three both sum to 156 in Ordinal:

As we commonly see with people who died young, her Wikipedia profile picture is from the year 2011

Her suicide fell exactly 47 days before the next total eclipse 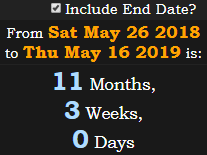 Her last name also sums to 86