This past week, I’ve been suffering from really disturbing dreams, some of which I would definitely call nightmares. Those appear to have ended, and instead, the past two nights, two different deceased pro wrestlers appeared in very vivid dreams. The first was Eddie Guerrero, and the next was Andre the Giant.

The dream with Eddie in it was bizarre (it was a dream, after all). It turned out he was alive, and had been wrestling in Mexico under different aliases. No one figured this out, despite the fact he wasn’t even wearing a mask. In the dream, he told me how much respect he had for me because I was always making the most of my opportunities in the ring (because I guess I was a pro wrestler).

The next night, I dreamed that the last girl I dated had gotten engaged to Andre the Giant. Our relationship was short-lived, so that’s not why I was upset that she wasn’t returning my calls in the dream. I was upset because my car was parked at her house, and all my other cars kept going up in flames while they were parked outside at my work (again, dreams are bizarre).

Is it possible that we dream by the numbers, and the spirits of those who have left this planet are swimming among the ether, visiting us in our sleep?

I made this post on the death of Eddie Guerrero on April 15th of last year, which was 153 days after the anniversary of his death. 153 is the 17th Triangular number.

The day he appeared in my dream was 1 year, 17 days later, which was 170 days after the anniversary of his death:

That blog post begins by mentioning that an episode of SmackDown! in which Guerrero’s wrestling character had a heart attack aired on a date with the same numerology as his real-life death. That episode aired on May 20th, or 5/20. The dream I had about Guerrero was on May 2nd, or 5/2, which was a span of 5 months, 20 days after the anniversary of his death: 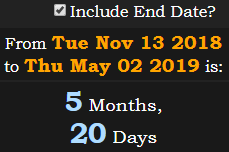 Not including the end date, my dream was 5 months, 19 days after the anniversary of Guerrero’s death from atherosclerosis

The next night, I had a dream with Andre the Giant, who was born on 5/19

That dream fell 1370 weeks after Andre died in 1993. 1370 was the number of focus in my video yesterday about Colonel Sanders:

In the dream, Andre got engaged to the last girl I was seeing, who is 26 years old, and her first name sums to 97 (Ordinal). Today is a span of 26 years, 97 days since Andre died: 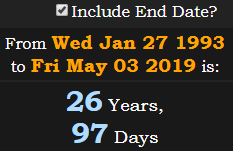 As I mentioned earlier in the post, it wasn’t their engagement that upset me, but the fact that my cars kept burning up. The first phrase I typed in was burning cars.

Andre would currently be 72 years old.