The top story today is a synagogue shooting in Poway, California, which was incorporated on December 12th, 1980. 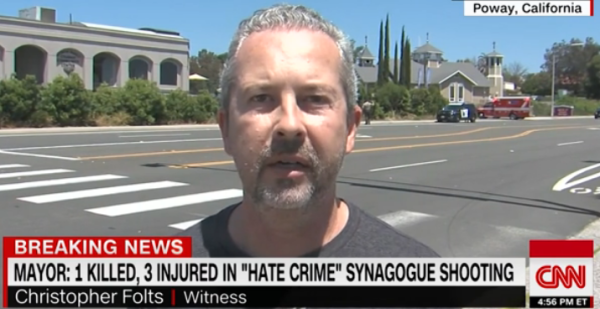 The Bavarian Illuminati was founded with 13 families.

Notice how CNN’s banner quotes the Mayor of Poway, claiming 1 was killed and 3 were injured. This is interesting, because as proven by this article, Mayor Steve Vaus was sworn in on Tuesday, December 18th, which was exactly 130 days before the shooting:

13 is the primary ritual / hoax code. This event took place on the 117th day of the year:

The shooter’s last name was Earnest. Last month, I made this post on a bizarre pi tribute for Jim Varney, who played the character Ernest P. Worrell. That was also in California, and it was 1 month, 17 days ago:

The Bavarian Illuminati was founded on a date with 99 numerology:

Exactly 67 days before the shooting, Manny Machado signed the largest deal in MLB history to play for the San Diego Padres. Again, Poway is a suburb of San Diego, whose current Mayor was born in ’67 and was re-elected on June 7th, or 6/7

The name of the shooter in today’s incident is John T. Earnest

Recall, October’s synagogue shooting in Pittsburgh fell on a date with 19 numerology.

The Bavarian Illuminati is 361 days after the anniversary of its inception:

The two synagogue shootings were a span of 183 days apart:

The shooter’s name is spelled Earnest, but remember, the name Ernest, who this ritual is a tribute to, sums to 1331 in both Square number ciphers, which syncs up with Poway

Faulconer has been in office for exactly 1881 days:

Ernest sums to 81 in both Ordinal methods:

Today is a span of exactly 19 years, 11 weeks since Jim Varney, who played Ernest, passed away: 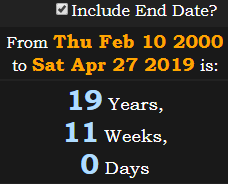