Less than a month after making my post on Heath Ledger in February of 2018, his name was updated on Wikipedia from Heathcliff Andrew Ledger to Heath Andrew Ledger. Naturally, this changed his name gematria, so I thought it would be fitting to do a new post on one of the most infamous celebrity deaths in recent history.

The key to this riddle lies in the fact that when his body was discovered by his masseuse, a phone call was first placed to actress Mary-Kate Olsen instead of 9-1-1. Mary-Kate is one half of the Olsen twins, who are best-known for their shared role as Michelle Tanner in the television series Full House.

The number 86 is often used as slang for offing, or getting rid of:

Both Heath Andrew Ledger and Mary-Kate and Ashley Olsen sum to 86 in Reduction:

The Olsen twins were born 86 months after Ledger, in the year ’86

“Heathcliff” = 860 (Squares). Heathcliff: The Movie was released in the year ’86. The television show Heathcliff ran for 86 episodes:

Heathcliff debuted a span of exactly 1220 weeks before Heath’s death: 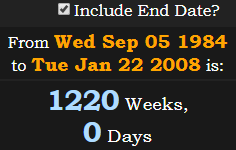 86 is also the Ordinal gematria of nineteen

Also notice the 244. This is the Jewish/Latin value of nineteen

The first episode of Full House aired on September 22nd, 1987, which was exactly 244 months before Ledger’s death on January 22nd, 2008. Additionally, January 22nd falls exactly 244 days after May 23rd, the date on which Full House’s final episode aired:

His death fell 27 weeks, 3 days before the next total solar eclipse.

In the English alphabet, kill sums to 44

Ledger died a span of 193 days before the next total solar eclipse (192 days without the end date):

Of course, a solar eclipse occurs when the Moon covers the Sun.

Dualstar was founded in the year ’93. Our star, the Sun, is said to be 93 million miles away. 93 is a number closely-associated with Christianity

Per the Gospels, Jesus was crucified during a solar eclipse, most likely at the age of 33 or in 33 A.D.

The Olsen twins were 7 months, 9 days into their 22nd year since birth:

Ledger’s birthday had a Life Lesson Number of 34

The series finale of Full House aired on May 23rd, 1995, which was a span of exactly 152 months before Ledger’s death: 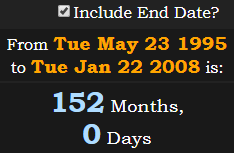 Ledger was best-known for his role as the Joker in The Dark Knight, which wrapped up filming just several weeks before his death, and was released about 6 months later. The film has a running time of 152 minutes:

This post began with the 86 gematria of blood sacrifice and human sacrifice. These phrases both sum to 67 in standard Reduction:

In Reverse, Michelle Tanner sums to 77

The Olsens were born 7 years, 70 days after Heath Ledger: