Stefanie Sherk was a Canadian model and actress who was married to actor Demián Bichir, whose full name matches eclipse sacrifice.

Notice the 101‘s. Sherk died exactly 101 days after her birthday:

In the Gospels of the New Testament, it was Jesus who was crucified during a solar eclipse. Bichir’s full name in Jewish/Latin gematria matches Jesus Christ in English:

Including the end date, her death fell 74 days before the next total solar eclipse:

She died 37 weeks, 3 days before her husband’s birthday:

Her death fell on April 20th, a date with Reduced numerology of 18

Sherk was 18 years younger than her husband, who was born on the 1st of August, or 1/8. The film Shrek was released 18 years ago this week.

According to famousbirthdays.com, Stefanie was best-known for her role in a TV show called #Hashtag: The Series

She died 73 days before the next total solar eclipse, and 607 days after the most recent one:

Both of these numbers are prevalent in death/murder by numbers. 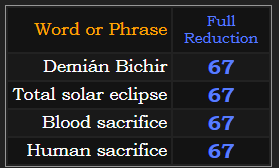 Her husband, Bichir, has one Academy Award nomination to his credit for his role in the film A Better Life, which was released exactly 7 years, 300 days before her death:

In Ordinal / Reduction, ritual human sacrifice sums to 211 and 94