Since CNN posted this article, the official death toll has risen to 321, which intriguingly sums to 290 in Ordinal gematria.

Why is 290 significant? Consider that ISIS / ISIL has taken credit for this attack as a retaliation for the bogus Christchurch mosque shootings, which targeted Muslims. This attack targeted Christians:

Christ was an eclipse sacrifice

The attack occurred in Sri Lanka, a span of 290 days before their next Independence Day:

Measuring from Sri Lanka’s most recent Independence Day, we get a span of 77 days:

Could the riddle be any more obvious? 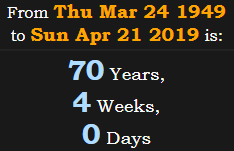 For quite some time, we’ve been discussing how important August 11th is this year, and how it may be the date of a major event. 8/11 is the 223rd day of the year:

President Sirisena is 811 months old, and he and Prime Minister Wickremesinghe have been in office for 223 weeks:

The terror attack was on Easter