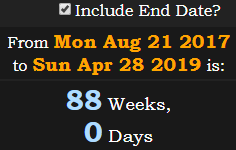 This year’s London Marathon is pretty interesting. It falls a span of exactly 88 weeks after the most recent total solar eclipse:

The first ever London Marathon was held on March 29th, the 88th day of the year:

London shares three numbers with Nipsey in the base ciphers, including 88. Another one is 74.

Nipsey Hussle died on the 90th day of the year:

Nipsey Russell died on the date leaving 90 days in the year:

The other number shared by both “Nipsey” and “London” is 29. Nipsey Hussle died a span of 29 days before this year’s London Marathon:

Nipsey Russell died a span of 179 days before the nearest total solar eclipse: