Jussie Smollett is in the news again today.

Chicago, Illinois was incorporated as a city on March 4th, 1837 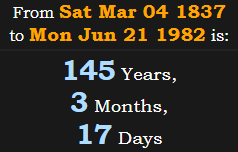 He’s now famous for lying about what happened to him in Chicago, Illinois, when he was 13,371 days old:

Chicago on its own sums to 46

So does Jussie Smollett

Seven days later, when Jussie claims he was attacked, it was 4 weeks, 6 days before Chicago’s anniversary:

This whole incident occurred while Jussie was 36 years old

The threatening letter he received said “Smollett, Jussie you will die”

666 is related to the mathematics of the circle

Jussie Smollett was born on June 21st, written 21/6.
He received this letter on the 216th day of his age:

The mathematics of the circle are resolved with pi, or 3.14

There are 360 degrees in a circle.

Today, Smollett is being asked to pay $130 thousand dollars
In numerology, 130 represents 13
Illinois has overlapping gematria with Thirteen