Without the foreign character, Reykjavik, Iceland sums to 70

Today has Full numerology of 70

As with any negative story involving airplanes, there is some 911 coding in this story.

The World Trade Center sat on almost exactly the 74th meridian. It was destroyed on the date 9/11.

Iceland celebrates its national holiday on June 17th to commemorate their independence from Denmark in 1944. That date was 74 years, 9 months, 11 days ago: 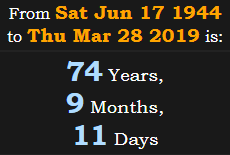 The Prime Minister of Iceland, Katrín Jakobsdóttir, was sworn into office on November 30th of 2017, which means today is a span of 119 days after her first anniversary:

The President of Iceland is Guðni Th. Jóhannesson

911 flipped upside-down is 116, matching the gematria of WOW air

Even though this story is about the collapse of an airline, and not an actual plane crash, the coding still exists.

To begin with, not only is today 19 months, 7 days after the most recent total solar eclipse, but it’s a span of 97 days before the next one:

In Reduction, plane crash sums to 43

Today has a Life Lesson number of 43

WOW air began operations on May 31st, 2012, meaning today is exactly 43 weeks after their anniversary: 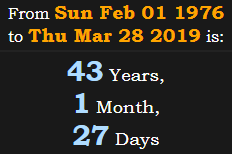 Although this story made international headlines today, it all really began yesterday, March 27th, when WOW air first announced that today’s flights would be cancelled. March 27th had Full numerology of 69

On that date, Prime Minister Jakobsdottir was in office for a span of exactly 69 weeks: 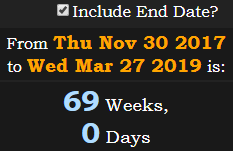 Both Saturn and sixty-nine sum to 1723

The speed of Saturn is 9.69 km/s. President Johannesson has been in office for exactly 969 days:

In Reduction, Saturn sums to 21