On November 21st, 1789, North Carolina became the twelfth state admitted to the Union. It was exactly 4,888 days (or 13 years, 140 days) after The United States’ Independence Day:

The first Governor of North Carolina was Richard Caswell, whose Jewish gematria overlaps with three point one four in Ordinal:

That second term ended 31 weeks, and 4 days after its second anniversary:

Caswell died on the date November 10th, the 314th day of the year:

Pi has gematria of 11

Caswell died 11 days before North Carolina was admitted to the Union:

Carolina sums to 73 in Ordinal:

North Carolina is named after King Charles I, who has overlapping 73 gematria with Richard Caswell

Charles I died a span of 73 days after his birthday:

North Carolina was admitted to the Union a span of 703 days after Caswell’s last day as Governor:

There are 360 degrees in a circle.

Caswell’s first term was 1255 days long, and the second was 951 days. This means if they had occurred back-to-back, it would have been a span of 2207 total days.

North Carolina became a state on the 325th day of the year:

Much more on Masonic numerology below.

King Charles sums to 116 in the alphabetic order:

North Carolina’s first governor, Richard Caswell, was sworn into office on a date with 116 numerology:

When North Carolina was admitted to the Union, Caswell was 60 years, 110 days old:

Also notice how Caswell matches Charles I in the alphabetic order:

It was a span of exactly 136 weeks after his second term began: 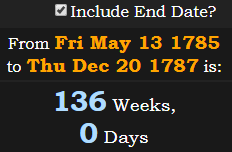 Charles on its own sums to 66

Richard Caswell’s first term began on November 12th of a leap year, the 317th day of the year:

In Reduction, both Charles and Charles I sum to 39

Charles died 309 days after the date March 27th, which is when he first assumed the throne:

Richard Caswell, was born 104 years after Charles I became King. 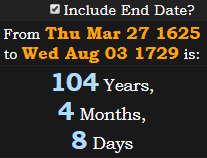 Notice how Scottish Rite, which Caswell has overlapping 644 with, sums to 1448 in Trigonal.

The 1039 in Jewish represents 139 in numerology. This is the Ordinal value of Freemasonry

Scottish Rite sums to 57 in Reduction:

Richard Caswell was born on a date with 57 and 30 numerology:

These numbers are a tribute to Charles I of England

Charles I died on the 30th day of the year:

Caswell became Governor of North Carolina a span of 132 days after the United States’ Independence Day:

Both Richard Caswell and Caswell have 242 gematria: