The state of New York was admitted to the Union on July 26th, 1788, a date with Reduced numerology of 39

The admission of New York gave the U.S. eleven states

The state’s nickname is the Empire State

The first Governor of New York was George Clinton. He was born in 1739

Clinton’s first term began when he was in the first week of his 39th year since birth. He served as both the 1st and 4th Governor of New York. These are the lengths of his two terms:

When Clinton’s second term began, he was 61 years old. It was exactly 6 years, 1 day after his first term ended:

The 58th Triangular number is 1711, matching the length of that term: 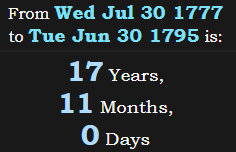 Clinton was born on July 26th – the same date New York was admitted to the Union. July 26th is the 207th day of the year:

He was exactly 49 years old when New York was admitted:

George Clinton ended up dying on April 20th, the 111th day of a leap year:

The name George sums to 57, as does England

There were 72 months between Clinton’s two terms as Governor. George Clinton had birth numerology of 72

The reign of James II of England lasted exactly 1404 days:

Eleven and the eleventh state both have gematria of 63