Luke Perry was best-known for his role on Beverly Hills 90210, which has that fateful 187 gematria:

Today is 1 year, 6 months, 1 week (or exactly 80 weeks) after the most recent Total Solar Eclipse:

1.61 is the Golden Ratio, which has matching 120 gematria with eclipse

Today is 120 days before the next total solar eclipse:

3.14 are the first three digits of pi, which resolves the mathematics of the circle

Perry has passed away on March fourth

In Jewish gematria, phi sums to 77 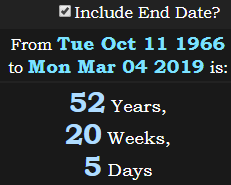 The other celebrity death in the headlines today is Keith Flint

Luke Perry was an actor on the show Riverdale. Keith Flint was a singer in Prodigy