When I checked Facebook this morning, I saw a friend request from a friend of mine who was a neighbor during middle and high school. As I’ve recently documented, it appears as if our relationships, particular those of a romantic variety, have numerical synchronicities between names and dates on the calendar.

I recently heard she had decided to get divorced, but whether or not that has anything to do with reaching out will not be a topic of this post. What will, however, is how this tiny little act was still by the numbers.

First off, February 25th is one of those special dates that has gematria matching the numbers used to write the date. Internationally, February twenty-fifth is written 25/2

As I’ve seen several women do in the past, including a friend I made this post about in November, she changed her Facebook name to her First + Middle name, leaving out her current (married) name.

I got the request on the date written 2/25

February twenty-fifth is 99 days before my birthday:

If we instead use her current legal (married) name, which I don’t believe has been officially changed back yet, we get 66 in Reduction: 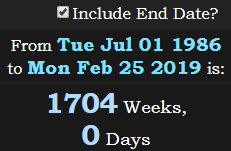 Meton is the astronomer credited with figuring out the Metonic cycle, which has 254 sidereal months

The numbers of the Metonic cycle were found everywhere in the numerology of the last girl I saw, as again documented in this post. We first went out 127 days after we met. She ended it on 1/27, and when I left the bar, I was 127 days before my birthday.

Today is a span of 127 days before her birthday:

Jess just so happens to be 1 year, 27 days younger than me:

The Greek word for the Metonic Cycle is Enneadecaeteris (nineteen years).