The word Beresheet isn’t far off from the word bullshit

113 is the primary number of deception

The spacecraft was launched aboard the Falcon Heavy rocket:

It’s scheduled to land on the Moon in its 49th day since takeoff:

Takeoff was 49 years, 7 months, 7 days after the launch of the first manned Moon mission, Apollo 11: 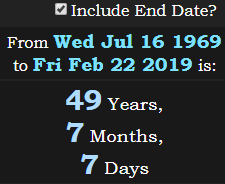 The Moon is ruled by Cancer, whose astrological symbol is 69
The first fake Moon landing was in the year ’69 on the date July twentieth

This is the gematria of Beresheet Lander

How about some 666 connections?

The launch was 5 months, 7 days before the anniversary of NASA:

The nation of Israel was founded on May 14th, 1948. Measuring from May 14th to the Beresheet launch gives us 40 weeks, 4 days, a nice number for Israel to go to space