The Eighth state admitted to the Union was South Carolina

Despite being around since the 1600’s, it seems highly possible that South Carolina was formed as a tribute to the 2017 Great American eclipse, which cut almost exactly halfway through the state. 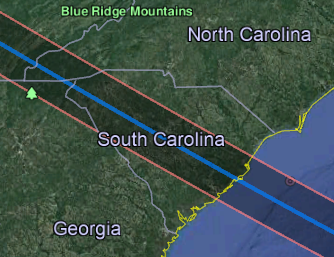 The eclipse in 2017 was the first coast-to-coast total eclipse in America in over 99 years.

The last city to witness the total eclipse was Charleston, SC 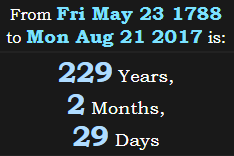 The first Governor of South Carolina was John Rutledge, when he left office, he was exactly 2209 weeks old: 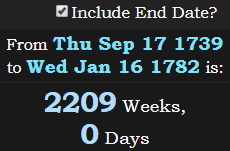 What does King Charles I have to do with Carolina? As it turns out, it’s who the capital of Charleston is named after. Carolina even comes from “Carolus”, the Latin name for Charles I, who formed the original territory:

That date is also written 19/11 internationally:

John Rutledge was born in ’39

He became Governor at the age of 39

He was born 114 years after Charles I became King.
He died 309 days after his birthday:

He died a span of 73 days after his birthday:

South Carolina became a state a span of 187 days after Charles I would have turned 187 years old: 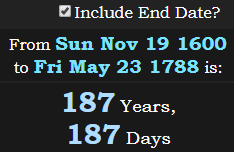 John Rutledge was born 1087 months after King Charles I died:

Their date of statehood was also 57 days after the anniversary of the date King Charles I took the throne:

When Rutledge left office, he was 507 months old:

Finally, the date of statehood was the 115th day after the 139th anniversary of his Charles I’s death: 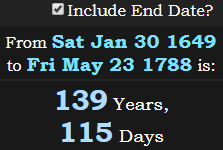 The highest degree of the Scottish Rite is said to be the 33rd degree. South Carolina has matching numbers with thirty-three