The Moon travels 28.5 degrees north and south of the equator, meaning it has a range of 57 total degrees.

Adding the first and last names of the three Apollo 11 crew members yields 5757 in Square numbers, one of the base ciphers tracing back to Hebrew gematria:

The Moon landing on July twentieth was exactly 570 days before the next total lunar eclipse:

In the same month as the first Moon landing, the United States turned 193 years old:

The three astronauts were born within a duration of 40 weeks, 4 days:

When the shuttle took off, the United States was 10071 weeks old:

That’s the full name of Buzz Aldrin, the second man to step foot on the Moon. He was exactly 2061 weeks old when he did so:

Michael Collins, the only man on the mission not to set foot on the surface, was 2020 weeks, 3 days old on that same date:

There are 223 synodic months in the Saros cycle, which allows us to predict the next solar or lunar eclipse.

The words Moon, Lunar, and cycle all sum to 21

NASA was established on the 210th day of the year:

Neil Alden Armstrong is said to be the first person to walk on the Moon. They landed on the 201st day of ’69, July twentieth

July twentieth also shares gematria with eclipse, which is of course the most significant event involving the Moon, across multiple methods.

The words eclipse and lunar both sum to 69 and 33

One of the Hebrew words for Moon sums to 33

The date man is said to have first set foot on the surface of the Moon fell a span of exactly 303 days after the most recent total solar eclipse:

When Apollo 11 landed, it was a span of exactly 33 weeks before the next total solar eclipse 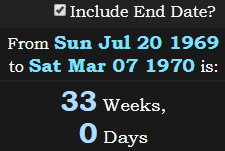 First steps on the Moon were taken on the 202nd day of the year:

Armstrong’s date of birth is extremely Masonic. August 5th is written 5/8 in most parts of the world. ’58 is when NASA was established.

His name is pretty Masonic too…

In Satanic gematria, the word Moon sums to 197

The 19-year cycle that syncs up almost perfectly with 235 synodic months is called the Metonic cycle.

The date Apollo 11 was launched was the 197th day of the year:

The two men who walked on the Moon, Neil Armstrong and Buzz Aldrin, were born 197 days apart:

When looking at lunar phases, we find that in this 19-year cycle, 7 of them contain a thirteenth month.

When Apollo 11 was launched, it was exactly 4005 days after NASA was established:

The date of the Moon landing and the date man supposedly set foot on the Moon were 4010 days after NASA was established:

It was also exactly 41 weeks after the most recent total lunar eclipse:

In Hebrew gematria, the word for Moon sums to 218

In Ordinal, Moon has a Hebrew value of 38

Two of the three astronauts were 38 years old, including the first to walk on the Moon.

The word Masonic sums to 223 in Jewish gematria, the same as Yareach (The Moon) in Hebrew:

The date also had Full numerology of 115