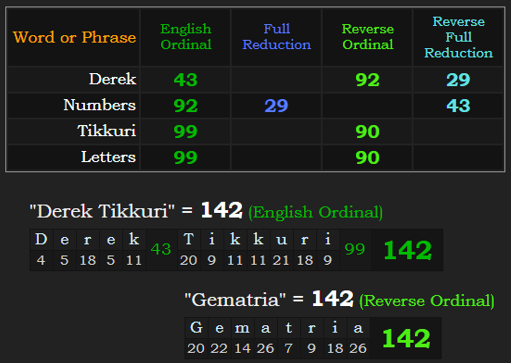 I first learned about gematria in late 2015. I found it a little interesting, but didn’t put too much stock in it over other conspiracy-related content until I really began paying attention in mid-late 2016 as the Cavaliers and Cubs completed their rare, epic, 3-1 comebacks in the NBA and MLB.

I knew something was up, but I couldn’t believe gematria, which was so SIMPLE, had anything to do with it. Unsatisfied with the current gematria tools on the Internet, I built the Gematrinator Excel app so I could spend some time studying it myself in an efficient manner. I fully expected to conclude that someone could make anything they want out of numbers…but after a couple weeks looking at the gematria of words in the dictionary, how we spell our numbers and dates, and looking closely at news stories, it became painfully obvious to me that THIS was perhaps the primary missing piece of everything I had been searching for. So I started making videos, reached out to Zach, built a website, and here I am over two years later trying to wake the world up to what’s happening.

It wasn’t until after I began sharing this information that I began waking up to the Organic Matrix – the idea that gematria (which has the same root word as matrix) actually has something to do with our life experiences. After building the website and bringing a simple way to study gematria to the world, I made the mind-numbing discovery that I am “coded” for this:

Today is 14/2, like the value of both my name, Derek Tikkuri, and gematria. So it seems fitting that today, I left a WhatsApp group chat because I was fed up with people STILL being skeptical about what I share.

I thought my post on the numerology of the Mars Opportunity rover ending was overwhelmingly convincing, but apparently, it’s still not enough for everybody. They’d still rather believe in the outer space fairy-tales told by rich and powerful people.

Today, 14/2, is Valentine’s Day. In what appears to be a complete coincidence, Valentine’z with a “Z” yields 142 in two of our most significant ciphers: