Opportunity was launched on July 7th of 2003:

The Mars Rover was nicknamed Oppy

It’s the Scottish Rite of Freemasonry in charge of NASA

The Opportunity Rover was launched less than one month after the Spirit Rover, which was sent up on June 10th, 2003:

NASA says they lost contact with the Opportunity Rover on the same date, June 10th, of 2018:

These dates are exactly 15 years apart:

The mission ended on a date with Full numerology of 54

It was a span of 8 months, 4 days after last contact was made:

Mars has the same gematriot as Moon

The first Mars rover was launched 325 days after the anniversary of the Moon landing:

On the date of this news, February 14th, the Sun is located at the 325-degree mark of the ecliptic.

To mourn the loss of the Rover, NASA put up this Tweet parodying lyrics of an Elton John song named Candle in the Wind 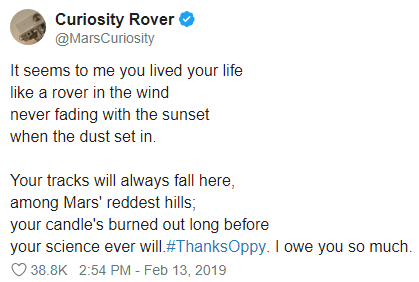 NASA was established on a date with 113 numerology:

113 is the primary number of deception
The Challenger disaster occurred 1:13 after launch
The Columbia disaster was the 113th shuttle launch
NASA’s current Administrator, Jim Bridenstine, was sworn into his role on the 113th day of the year:

Candle in the Wind was released on the 35th day of the year: 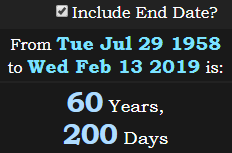 Although the mission ended yesterday, the news is primarily hitting the mainstream today, February 14th, which has 28 and 19 numerology:

This syncs up with the official name of the Opportunity Rover, Mars Exploration Rover – B

28 is also the gematria of NASA in Reverse:

The news falling on the 14th is interesting for another reason. Think about how the first Mars rover, Spirit, landed on January 4th, written 1/4. The second rover, Opportunity, landed on a date with 14 numerology: 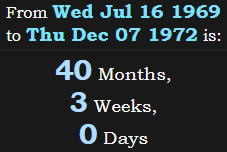 The Opportunity Rover was declared dead exactly 403 weeks after its sister rover, Spirit:

Spirit took exactly 209 days to get to Mars:

It took Opportunity exactly 29 weeks to do the same: 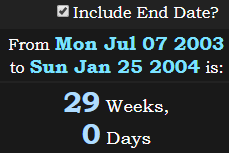 The first Rover, Spirit, landed on Mars on the fourth day of 2004

The second one, Mars Opportunity, landed later that year:

Their landing dates were separated by 21 days:

By supposedly landing on the Moon barely 10 years after their establishment, NASA accomplished more in its first decade than it has since.

The first fake Moon landing of six was in ’69