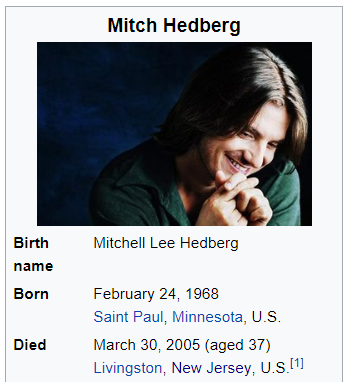 Mitchell Lee Hedberg, who made his money as a comedian, died of a drug overdose at the age of 37

Notice this bizarre “error” whoever edits the Wikipedia article made:

He died on the date March 30th, written 30/3 internationally. This matches the gematria of the two drugs blamed for his death:

He died in the city of Livingston

His full name sums to 90 in both Reduction ciphers:

They share 79 and 83 in the base ciphers, but also notice the 38 value for Murder. This matches the Standard numerology of the date he died:

As for the 34 in Reduction, Mitch was 34 days into his 38th year since birth:

He died exactly 70 weeks, 3 days after the most recent total solar eclipse, or a span of 70 weeks, 4 days.

It would be inconsistent to not show the alarming number of matches between Freemasonry and the city where Hedberg is said to have died. We already say the syncs with 33 in the previous section.

It’s things like this that make me wonder if comedians such as Mitch Hedberg, Bill Hicks, or even George Carlin really died when we’re told they did. Consider how Hedberg died on a date with Full numerology of 58

Livingston sits on the 74th meridian and 40th parallel:

113 is the primary number of deception. So, should we be suspicious of that he was born in Saint Paul on a date with 113 numerology?Because 1968 was a leap year, it was also the date leaving 311 days in the year:

He was even born in Saint Paul, Minnesota

I haven’t expanded much on this method of measurement lately for a couple of reasons – a) I haven’t been doing as many Murder by Numbers posts and b) this is where it feels like gematria can get out of control for me. But I still think there’s a lot of relevance here that needs to be further explored.

As mentioned near the beginning of the post, Mitch Hedberg sums to 102