This news about a negotiation with Kim Jong Un falls 129 days before Trump’s birthday:

The meeting will end on a date with 42 and 49 numerologies:

The first date will also have Reduced numerology of 23, fitting for a summit with Korea

Mathematics of the Circle

The meeting will fall 50 days after Kim Jong Un’s birthday:

This ritual, per usual, involves the mathematics of the circle.

Trump will be meeting with The North a span of 108 days before his birthday:

The word Pi has Ordinal gematria of 25

The National holiday in both North and South Korea is National Liberation Day, which was a span of exactly 25 weeks ago: 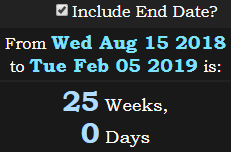 Today is exactly 34 weeks after that summit, which was in Singapore

Today is also 139 days before the anniversary of Freemasonry

This means it’s a span of 227 days after Freemasonry’s anniversary:

Today is also 7 months, 22 days before the Jesuit Order’s anniversary:

Korea’s National Liberation Day is August 15th, the 227th day of the year:

It’s interesting that Trump will be meeting the leader from Pyongyang, North Korea in Vietnam

The meeting will take place 187 days before Vietnam’s Independence Day on September 2nd:

The meeting will take place on the 58th and 59th days of the year:

58 is the gematria of Biegun, the U.S.’s negotiator for North Korea.

The sub-headline of CNBC’s article reads as follows:

Stephen Biegun is the negotiator for North Korea?

Stephen will need to get through to Kim…

I’m assuming he can talk in Korean