Super Bowl 53 was won by the Patriots. The 1953 NFL Championship was won by Detroit.

Detroit beat the Browns in that game.

The Lions’ quarterback was Bobby Layne. On the date of the championship game, he was 9870 years old:

The Browns lost with 16 points. The coach of the Browns was Paul Brown. He was a span of 16 weeks, 0 days after his birthday: 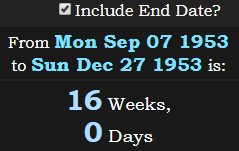 The coach of the Lions for the ’53 season was Buddy Parker. He was born 5 years, 3 months after Paul Brown:

Bobby Layne, the winning quarterback for the Lions, was exactly 1410 weeks old when the ’53 championship was played:

Julian Edelman was the leading receiver this year with 141 yards. This must mean Layne and Edelman are numerically connected, right? They were born exactly 3100 weeks, 4 days apart:

Bobby Layne’s birthday falls 227 days before that of Tom Brady, who won this year’s championship:

Bobby Layne threw a 33-yard game-winning touchdown pass to Jim Doran in the 4th quarter. Doran was 227 days before his birthday: 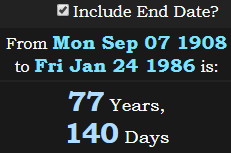 On the date of that championship game, Brown was 45 years, 112 days old: 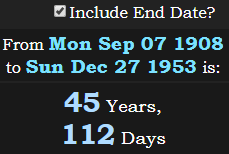 The losing QB of Super Bowl 53 was Jared Goff, who lost to New England exactly 112 days after his birthday:

They also share Reverse gematria of 171. The losing quarterback of the ’53 Championship was Otto Graham, who was 11710 days old on the date of the Championship game: 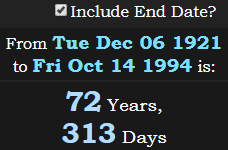 A little bit more on Otto Graham, who lost the ’53 Title  game:

The game-winning touchdown in the ’53 NFL Championship, as mentioned above, was scored by Jim Doran.

The only touchdown of Super Bowl 53 was scored by Sony Michel, who was born exactly 67 years, 190 days after Doran:

Super Bowl 53 was 19 years after the L.A. Rams, now coached by McVay, won their only Super Bowl.

There are 19 years in the Moon’s Metonic cycle

Back to Pi, which has a Jewish gematria value of 69

Both Jared and Goff sum to 69 in that same Jewish cipher:

The Super Bowl was played in Atlanta

Adam Levine, who performed the halftime show, was 322 days after his birthday:

Tom Brady’s first pass of the game was an interception thrown to Cory Littleton, who was born on the 322nd day of the year: